It’s no secret that when award season comes around many people feel as if loads of special films are left out of the opportunity to win a big award. Like everything, the awards are a political machine, but sometimes a few interesting and unexpected nominations slip through. I’d love to see the Academy Awards nominate any of the acting performances in the film Wildlife. 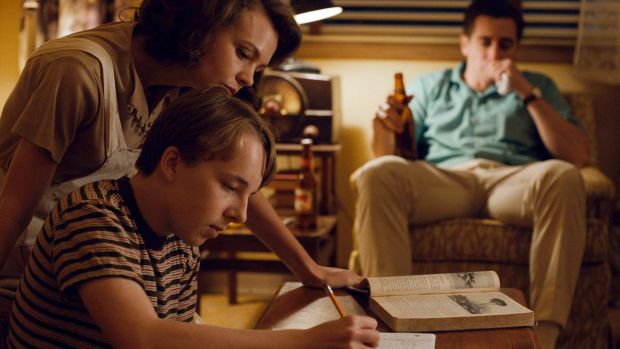 Wildlife is directed by Paul Dano, adapted from a Richard Ford story. Dano is perhaps best known for his piercing portrayal of twin brothers, Paul and Eli Sunday in the film There Will Be Blood.  His acting background aids his directorial choices as he frames the actors with enough space to flail and then fold into themselves. Told from the eyes of the child Joe (Ed Oxenbould), we watch a couple, a crackling dry family who has lost connections to themselves and each other posture and behave as if everything is okay while their world crumbles around them. Set in an idyllic Rockwellesque town with a permanent scenic view, it is unimaginable that such a quiet personal drama could unravel.

Jerry ( Jake Gyllenhaal) has just relocated his family to a new town for a job that isn’t working out. His wife Jeanette (Carey Mulligan) is fed up with having to recreate her world with every move and craves more independence. They barely speak and when they do they approach each other with feathers ruffled. Jerry finds work as a fireman in a national disaster fire and he will only return when it snows. Tension mounts for the wife and son left behind as they try to create a life for themselves and wonder if Jerry still has a life.

Gyllenhaal plays Jerry as a well-meaning but unrealistic man. He does poorly at his job because he is always fantasizing about something different and is unfocused and ill-mannered. In the scenes with his son, he tries to present himself as an important man, and his son wants to believe that he is. Jerry is held in place by Jeanette who has to be realistic about the cost of living and the challenges of maintaining a family. Mulligan has found the aching chrysalis of Jeanette as she knows that she is destined for more greatness than life has assigned her.

The simple story intensifies and weakens like the flames of the fire that is always in the background of the town. The film is shot with a tight lens and the masterful pacing of the dialog brings the audience into the home and into the suppressed emotions and desires of all who reside within creating an uncomfortable but recognizable intimacy. Academy- if you’re listening, give this one a shot.