Although nothing will ever come close to the thrill of seeing the original Alien film or it’s predecessor Aliens, but Alien: Covenant will provide new thrills, gobs of gore and an opening for the story to go forward.

The year is 2104, and the ship Covenant is bound for a remote planet, Origae-6, with a hibernating crew, some two-thousand colonists, and a thousand embryos on-board. They are overseen by a synthetic named Walter. The ship is hit which causes damage, death and the necessity for Walter to wake the crew. The crew hears a human signal from the near planet and they decide to go towards the signal to discover its source. 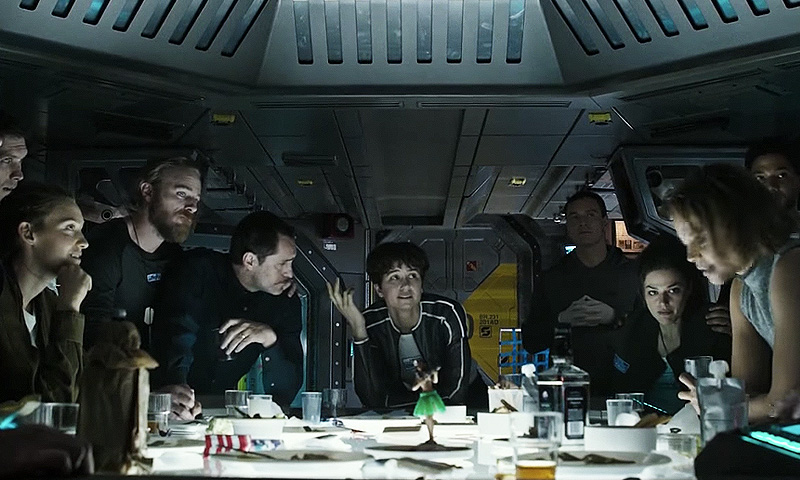 Thus begins some familiar tropes and themes of this Sci-Fi franchise. The team is divided, some are hesitant to explore the planet while others will do whatever the captain wishes. While the deaths of the crew occur in a predictable order, and the horror of the situation is familiar, there are still plenty of surprises as to the exact methods of the terror that unfolds.

There are some strange unnecessary additions to the film that muddle the experience. One being the choice of the writer to make Oram (Billy Crudup), a Christian. This comes up multiple times and is displayed as a weakness. Another weakness is the frenetic filming of some of the action scenes. It is shaky to the point that one must look away.

The exploratory crew members falsely believe that they have been saved when a synthetic, who looks exactly like Walter walks them through a field of corpses into a castle-like structure. At this point the film strongly references its predecessor, Prometheus. However, it isn’t necessary to have seen Prometheus to understand Covenant as the threads that hold the two together are discussed ad nauseam.

Daniels (Katherine Waterson) is the strong female crew member in this Alien installment and though she gives a steady performance it is, like most in the film, forgettable. The real stand-out is Michael Fassbender as both Walter and David. He is reprising the role of David from Prometheus. The subtle nuances of difference between the two synthetics is remarkably consistent and impressive, even in some scenes that lean towards ridiculous.

I appreciated the segment when Daniels discovers a room full of designs and drawings which appear to by or at least inspired by HR Giger. Giger was the artist responsible for designing the original Alien.