The problems with Burnt reveal themselves in the first scene of the film. Bradley Cooper plays Adam Jones. He’s an arrogant, debt addled asshole chef who cons people to get what he wants. In his opening monologue he explains his past and his future goals, where he is and why he’s there. If the film were to pause at that second, most savvy film goers would be able to predict the trajectory of the film. Unfortunately, predictability is the least of the film’s problems. 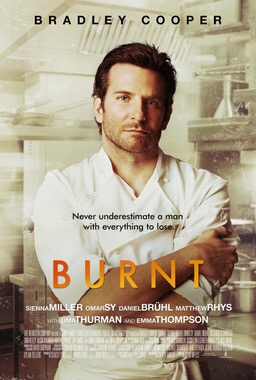 The second pillar of problems with the film is believability. Adam Jones has cheated, lied, and manipulated every contact that he had, sometimes to the extent that their restaurants closed and livelihoods were destroyed. We, as viewers are supposed to believe that when Jones returns to Europe years after this destruction these intelligent and successful people will give him exactly what he wants. In one case this includes renaming and taking over a highly rated and valued hotel restaurant. It is kid’s television show level contrived.

Sienna Miller is one of the bright spots in the film. She plays Helene, and is almost unrecognizable due to the depth that she dives into her character. She plays a hard-working, single mom who Jones is desperate to work with. We see her as a focused and proud sous chef and employee. All credibility that the audience has to her strength of character is compromised when we are expected to believe that she would fall for Jones even after her leaves her alone at a swanky party.

Emma Thompson plays a therapist who Adam has to go to weekly for blood tests to prove that he is clean. Her role is unnecessary and her character looks, speaks and feels more like a cartoon than a human. Another celebrity add on misfire is Uma Thurman. Her character is that of a well respected food critic yet she has almost no lines of dialog. A waste of talent and opportunity.

Visually, Burnt is a beautiful film. There are stunning scenes of the restaurant being prepared for service, of food being prepped and cooked, and kitchen action as lively as any battle scene. If the story matched the visuals instead of being forgettable, Burnt may have been remarkable.