Unbeknownst to me, Author and Illustrator Rick Geary has been producing a series of glorious true crime graphic novels since the 1980’s. His first series, A Treasury of Victorian Murders included volumes on Jack the Ripper, Lizzie Borden, H.H. Holmes and murder of Abraham Lincoln. He has been working on his more recent series, A Treasury of XXth Century Murder since 2008.

My introduction to Geary came in the form of what is considered a weaker book in the series, The Terrible Axe-Man of New Orleans. If this is a weaker title, I can only imagine how fabulous the other titles are.

In the steamy spring of 1918 a grisly murder was committed. A husband and his wife were slaughtered with a razor blade and an axe, both left behind at the scene of the crime. The police could not figure out who the killer was knowing only that the man was large in stature and wearing a coat. Within a month another attack occurs. The similarities: weapons used, no money taken and the method of entrance. A similar vague description of the killer is given, “a dark, hulking figure.” To some the story of the Axe-Man is not compelling because the details of each murder were sketchy, because there was never a clear answer as to who the murderer was, and because the murders lasted for a relatively short period, just two years. Instead of seeing these points as weaknesses, Geary focuses intensely on the strange details of the case and displays some twists to the true story that even the most cynical of readers will find interesting. 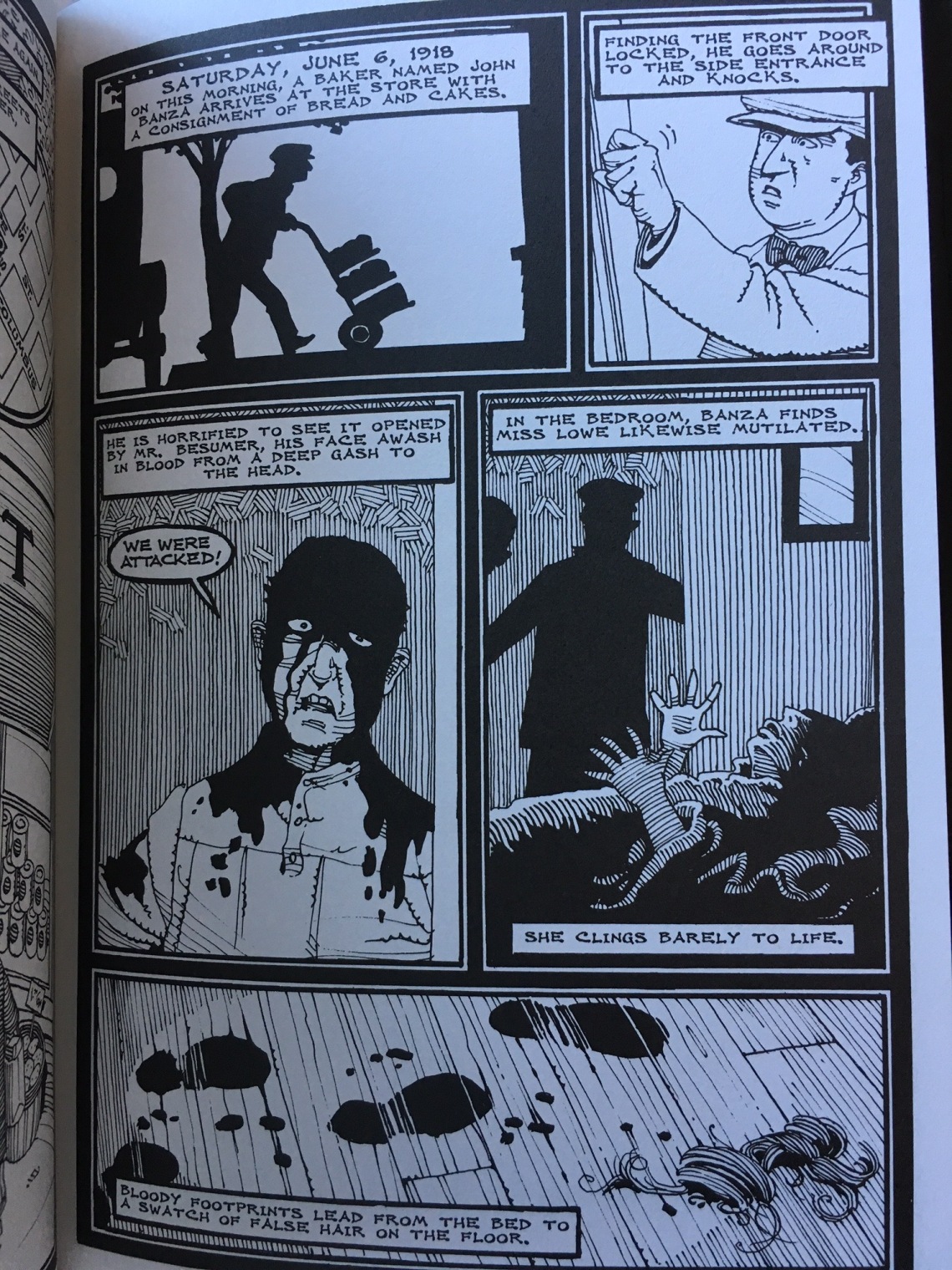 Geary writes in a lilting narrative. Reading his work one can imagine a dynamic professor electrifying a lecture hall with his knowledge and oratory skills. The art is at times reminiscent of bygone advertising with intricate line work and effective use of cross hatching. Each frame is fully utilized to illicit the tone of a city trying to stay in motion while an underlying terror is emanate. Each page is set in its own black frame which works effectively to delineate each square of the story. In the early happy frames one can feel the heat of the bayou, in the murder scenes the line work becomes more fervent, which intensifies the readers anxiety and excitement about what is to come.

I fell in love with the dark, romantic quality of this disturbed killer’s methodology while watching Season three of American Horror Story: Coven. It was also set in New Orleans and featured a slick haired, sharp suit wearing, saxophone playing Danny Huston as the Axe-Man. His character was written as misunderstood, lonely, maniacal deeply passionate man with anger management issues that resulted in him using a literal ax to solve his problems.

The book begins with a brief history of the city, a bibliography and map of the city showing the locations of the murders. The title page shouts: NIGHTS OF TERROR! A CITY AWASH IN BLOOD! And has beautiful hand lettering and the image of a faceless jazz musician playing the trombone. These opening pages set readers up for exactly what they will receive, a dark story dripping with mystery and jazz.