Addison’s world has been obliterated. An unexplained “spill” disaster has destroyed Poughkeepsie and any living creatures who were exposed to the spill are now frozen in a meat puppet state. The area is quarantined and named, the Spill Zone.

Knowing that her parents were lost in the spill, Addison has taken on the role of care-giver for her sister, Lexa. Although Lexa doesn’t speak, we see her mentally speak with her creepy, and seemingly possessed doll Vespertine. Vespertine has some deeper connection to the magic and darkness of the spill. 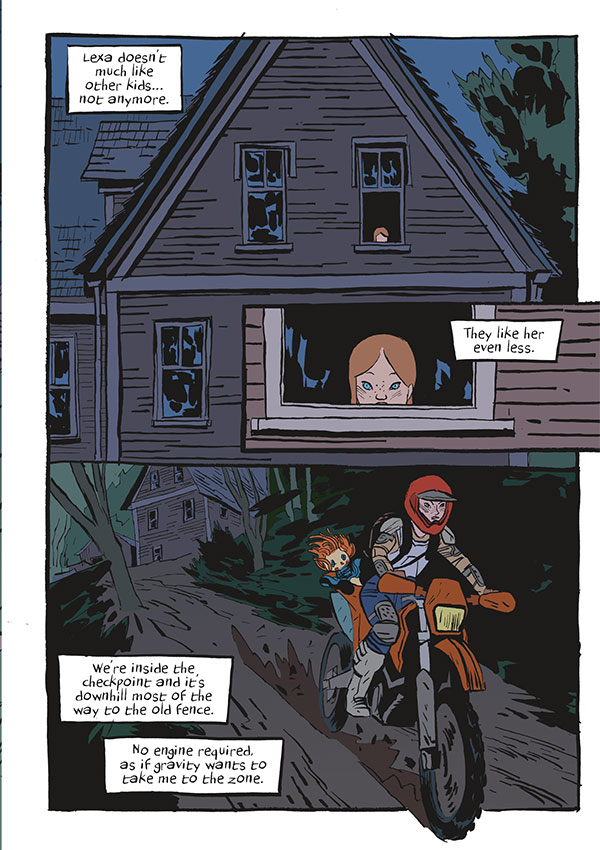 The only way that Addison can make money is to risk her life by breaking into the Spill Zone and taking photos of what she encounters. She then sells the photos on the deep black market. Addison is a refreshing female graphic novel heroine. She’s beautiful without being sexualized, she is confident without being grating, and she acts in the interest of survival, but also with a longing to create art.

After one of her excursions, Addison meets her biggest collector, Ms. Vandersloot, and she sends her on a million dollar mission. Addison knows that if she succeeds on the mission she’ll never have to go to the Spill Zone again, but survival is highly unlikely.

The illustrations by Alex Puvilland are enthralling. With rich colors and a sketch-like quality, readers feel as if they are moving quickly through the story with the characters. Each frame is well designed and begs for repeat viewings. The pastel color palette of the Spill Zone pages is an unexpected and striking choice which is both enticing and creepy. The Dali elongated creatures with tendrils and antlers and crazed eyes are like none seen before.

The creepy vibe of this book can’t be overstated. The mastery and synergy of storytelling through both text and illustrations pulses with a darkness. There’s a sense that what we are witnessing in this book is just the beginning of long, dark thread of horror.

There is no visible violence in this title, and there is no true gore although there are some creepy images of dead people (meat puppets.) There’s a prolific use of profanity which feels natural with the story and character, but which may need to be known to some librarians and parents before sharing with certain children or patrons. This title is best suited for teens and adults, and I would recommend it to any and every age appropriate reader who likes a thrilling, mind-bending adventure.